News and links for early October 2012

It’s been a month since my last post, and I feel I must announce a bit of a break from the Internet.

I’m not going anywhere, and I’ll still be online. But for the sake of getting things done, I need to give myself permission to not read every Internet article that comes my way and looks interesting. Whether I read a given article, or watch a given video will — for a while — depend more on luck than design, and sometimes I’ll have to let things go if I don’t have time for them. As an Internet addict I hate the thought of missing out on fascinating articles, but this has to be done.

Part of my long-term plan is to switch to a more efficient network connection, after which I should be able to browse just as much but more efficiently. Currently, there are hours in the average day when browsing is impractical because the connection cuts out every few minutes (which is particularly irksome if I want to watch a video), and at other times it’s just slow. This wastes time, and is unacceptable. Bearing in mind my goal of eventually switching to a more competant ISP, I’ve made good progress cleaning out old email, knowing that if I can get my email filed properly it will be much easier to compile a list of people and websites to notify if my address changes (like most people, I don’t maintain an address book: I just scroll up and find a previous email from the person I want to reply to). Currently my oldest unfiled emails date from mid 2010, which is so recent that I have other unfinished tasks date from the same era. So now those tasks need doing, too. Website maintenence, for example.

My new lounge chairs are due soon. I’ll have more to say after I get them, of course. In the meantime I’ll need to keep the living room tidy.

There was a native orchid display down the road for one September weekend. Here are two photos from the display section:

And here’s a photo from the sales section, followed by one of the orchid I bought (shown here on my kitchen windowsill). 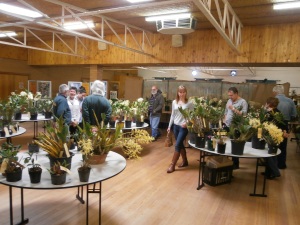 I bought the orchid (dendrobium delicatum) as a gift for my mother, who excitedly requested it when I mentioned the orchid display was on. Her birthday is today as I write this, the 7th of October. I haven’t had a chance to hand it over yet, but Dad will be in town Monday night (arriving home from a work trip to Papua New Guinea) so I’ll get him to deliver it. Meanwhile the orchid’s flowering season has ended, but with any luck the flowers will be back next year.

Incidentally, in a frivolous mood I was inspired to compose lyrics for a song to sing to your plants — here are the lyrics; I can upload a recording on request.

We’ll grind all the humans to powder
And sprinkle them onto the ground
But first we’ll let their screams grow louder
And savour that heavenly sound.

Walks in the Park

Here is a recording of some kookaburras from a September walk in Shepherds Hill Recreation Park.

On another walk (in early October), I snapped this close-up of a magpie that obviously expected to be hand-fed.

I also snapped the following picture of another magpie perched on a rock. Shortly after taking this photo, I saw a snake in the grass (and this being Australia, obviously a deadly one). But it slithered away before I could take its photograph. That was a bit scary: not what happened, but the “what if” scenario. 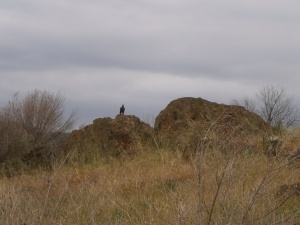