In a shop recently, Mum found second-hand copies of the Childcraft series from World Book Encyclopedia, which were among my favourite books as a child. I’ve often remarked they’d make great gifts for relatives who are about the same age now, so with this in mind, she bought them.

The Childcraft series is still being published, but in a form so different from the books I had that they can scarcely be recognised (over the years they’ve gone through many different editions, with some changes to the titles at each revision). Reading the series was a very significant part of my childhood. I received them about one volume a month when I was about seven years old — as an extended birthday present — and their contribution to my quest for knowledge is incalculable.

I particularly like the way they taught me things most people don’t learn about until long after their childhood is over, if at all. For example, ask yourself at what age you first learned about the Fibonnacci sequence. For me, it was at seven or eight years of age, via Mathemagic (volume 13 in the series). Also in Mathemagic is the classic puzzle of the Wolf, the Goat and the Cabbages, which when described in Artificial Intelligence lectures at university, was completely new to almost everyone in the class. There is a pleasant sense of privilege in being able to think to yourself, “I knew all about that when I was eight years old“.

Mathemagic is my favourite volume, and also covers the Moebius Strip, counting in binary, the history of the pentagram, the standard mathematical proof of the non-existence of vampires, and a whole lot more. Below is a photograph showing Mathemagic open to part of the explanation of the Fibonnacci Sequence, with selected other titles from the series beneath. (It is quite a large photograph, because I wanted to give a more-or-less realistic idea of the print size.) 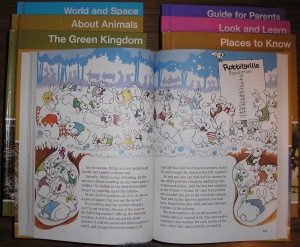 And here is a great article on the history of the pentagram. 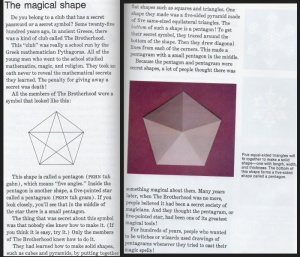 There is a bit of linguistics in volume twelve, Look and Learn, but not very much. Just the history of the alphabet (perhaps the origin of my own speculation on that subject), boustrophedon writing (though its account of that is more imaginitive than factual), the origin of the ampersand, and a few other things like that. I remember finding all of those examples interesting as a child.

Every volume has at least some interesting things to say. For example volume nine, Holidays and Birthdays, is not one of my favourites overall, but it contains this remark about the origin of birthday parties. “Long ago, people believed that on a birthday a person could be helped by good spirits or hurt by evil spirits. So, when a person had a birthday, friends and relatives gathered to protect him or her. And that’s how birthday parties began.” I do not know how true that really is, but I’ve always felt it’s the ultimate argument against people who oppose Halloween on religious grounds. How many are consistent enough to oppose birthday parties on the same grounds?

The volume that I read the most as a child was the only volume that wasn’t actually intended to be read by children – volume fifteen, the Guide for Parents. I was that sort of child. The Guide for Parents contains parenting advice (i.e. explaining children to adults, and I remember thinking it would be nice if there were books on parent psychology for their children) and a long list of medical conditions, which I have no doubt was part of the inspiration for my own glossary of fictional diseases.

If you come across a copy of the series in a second-hand sale or something, grab it, and give it to the nearest child who will let you read it too.

6 Responses to “Memories of Childcraft”