But I’ve decided that I must share one of my all-time favourite poems. I can’t spell out all of my reasons for doing this — there is subtext here — but I can give you one reason. It’s a truly beautiful poem and I love it.

Adrian Plass is a well-known religious writer, and I discovered his books back when I was religious myself. After I abandoned religion I pruned some books from my shelves, but — babies and bathwater — some things are worth keeping. Versions of the following poem can be found in at least two different books, showing that the author continued to work on it after the initial publication; my version is based on the one included in the book An Alien at St Wilfred’s (1992). I’ve made a couple of very small changes and punctuated afresh — it’s a poem for reading aloud, not for scanning from a page, so punctuation is arbitrary.

The poem is called “Angel”, and it is subtly religious, but you absolutely do not have to be religious yourself in order to love this poem to bits. Immediately below is an audio version I recorded early in 2017. Please wear headphones to listen to this because it’s binaural and I want you to hear me speaking softly into your ears.

For discussion: if it speaks to you too, what other poetry do you know that is as beautiful as this?

END_OF_DOCUMENT_TOKEN_TO_BE_REPLACED

Thanks to everyone who took part in my punctuation experiment. I got more responses than I thought possible, thanks largely to Stan Carey spreading the word on Twitter.

To begin this discussion of the results, here is a photograph of all the books I took quotations from. The full-size image is large enough to read most of the small print.

END_OF_DOCUMENT_TOKEN_TO_BE_REPLACED

Over on Stan Carey’s blog there’s talk of conducting a punctuation experiment sometime. It’s an idea that I tried out on something he wrote, after which we agreed that we should try it on a more organised scale, with more people involved.

Now, there’s only one reason for me not to have a turn at conducting such an experiment — namely that I just don’t have the readership to make it worthwhile. I would be lucky to get one response.

But it occurs to me now that this doesn’t feel like a problem if we call my version a rehearsal. Let Stan conduct the experiment proper, but in the meantime a rehearsal may be a good way to better determine the number, nature and length of quotations that should be used. (In other words, I would like a turn . . . and a little post-hoc justification never hurt anyone.)

[UPDATE: The experiment has now ended, and the results published here, although that needn’t stop you from submitting your answers anyway if you want to.]

So if you would like to take part in this rehearsal, here are your instructions:

END_OF_DOCUMENT_TOKEN_TO_BE_REPLACED

My previous post included links to a couple of blog posts by ElshaHawk, friend and regular commenter in these parts. Which reminds me of something I’ve always intended to blog about.

I met Elsha through the story-writing website ficly.com, where she is a frequent participant. I’ve published a few stories there too, but not for a while, and my friendship with Elsha is the main lasting thing I got out of it. That said, it was a lot of fun, and I’d go back if there were more hours in a day.

Ficly is a website where people write stories of no more than 1000 characters, and then write prequels and sequels to other people’s stories. There are also challenges – where people create their own story-writing competitions for other people to enter – and various other features I won’t list here. Below are three examples of stories from ficly.com, each consisting of an episode written by someone else and a sequel written by me.

If you want to, you can decide what happens next.

END_OF_DOCUMENT_TOKEN_TO_BE_REPLACED

Thinking of the sky

Many years ago, I bought a copy of the Doctor Who tie-in book The Monsters by Adrian Rigelsford and Andrew Skilleter. I still have the copy, though it’s showing signs of wear and the jacket is lost. Anyway, one of the introductory pages features the poem “I could not sleep for thinking of the sky” by John Masefield, for which I composed a tune and have made several attempts to record it over the years.

END_OF_DOCUMENT_TOKEN_TO_BE_REPLACED

In a shop recently, Mum found second-hand copies of the Childcraft series from World Book Encyclopedia, which were among my favourite books as a child. I’ve often remarked they’d make great gifts for relatives who are about the same age now, so with this in mind, she bought them.

The Childcraft series is still being published, but in a form so different from the books I had that they can scarcely be recognised (over the years they’ve gone through many different editions, with some changes to the titles at each revision). Reading the series was a very significant part of my childhood. I received them about one volume a month when I was about seven years old — as an extended birthday present — and their contribution to my quest for knowledge is incalculable.

END_OF_DOCUMENT_TOKEN_TO_BE_REPLACED

The Australian Skeptics have recently announced the date of this year’s national convention, to be held here in Adelaide in October. I plan to attend, with the hope of meeting some interesting people. In the lead-up to this event, I thought I’d try to post a few items that would be of interest to skeptics. This is one of them.

Whenever intelligible phrases are discernable in speech or music that’s played backwards, we know that those phrases must have been put there by the Devil and have supernatural significance. We also know that the Australian Skeptics are indisputably a Satanic bunch if ever there was one. Reflecting upon these facts, I wondered what we might find if we took audio material published by the Australian Skeptics and played it backwards.

The Great Skeptic CD 2 (available on the Australian Skeptics’ website under “Shop”) contains, among other things, several poems by Jim Wilshire. The following is a list of phrases that can be discerned when these poems are played backwards. Audio files are included as proof.

Here’s a blog post idea for you. Look through the greeting cards that people have sent you over the years, and select one that most accurately captures your personality. Then share it with the world. 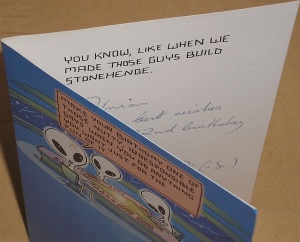 Scene: Aliens on spaceship.
Outside: “Make your birthday one of those nutty, irresponsible days when you do anything you want just for the fun of it.”
Inside: “You know, like when we made those guys build stonehenge.”

Another of my favourite birthday cards is below.

END_OF_DOCUMENT_TOKEN_TO_BE_REPLACED

Although I’m no longer personally religious, that does not keep me from admiring authors who write well on topics of religion and spirituality. One of my favourites is Reaching Out by Henri J M Nouwen, which I have mentioned before.

My copy belonged to my grandparents, though I never saw it when they were alive. After they had both died I was invited to look through boxes of books stored in the attic, and this was among the treasures I found. Here’s a photograph of the cover: 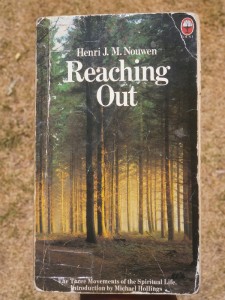 An assortment of quotations follows.

END_OF_DOCUMENT_TOKEN_TO_BE_REPLACED

These are just some assorted quotations which I happen to like. I got them all from the same book, but never mind that; it’s well out of print by now.