The following is a poem I wrote in 1999 as part of a creative writing course I took at university. Our task that week was to write a poem about poetry itself, and out of everything I wrote there, this is the only thing I’m still proud of.

It’s also the last of the items I’m re-publishing from my old website before shutting it down.

A particle, a fragment
Of a vision, of a thought
Lies dormant in deep places
Unknown, unfelt, unsought
Then stirs, then quickly rises
To that call so clearly heard
Takes its place upon the page
Becomes a word.

END_OF_DOCUMENT_TOKEN_TO_BE_REPLACED

The following is an essay I wrote for a university course called “Professional English” in 1999. In 2001, it was published in an edition of The Autiser (the magazine of the Autism Association of South Australia).

The Internet has changed a lot since I wrote this, but despite its obvious datedness I think the essay is worth preserving. I’ve made some small (cringe-proofing) editorial alterations from the original, but not made any substantial changes. Comments are welcome if you’d like to discuss the Internet of today with reference to the topic of the essay.

Is the Internet Destructive to Human Relationships?

My original image of the Net was one of all these sad, lonely souls, sitting isolated at their computers … I now see it as the opposite, a means for people to reach out to each other.

END_OF_DOCUMENT_TOKEN_TO_BE_REPLACED

Poetry competitions, and a little quantum

I recently entered two different poetry competitions on the Internet. One called for limericks specifically, while the other was open to short poetry of any form, but I entered limericks for both because I like limericks. And in one competition (but not the other), I won a prize!

END_OF_DOCUMENT_TOKEN_TO_BE_REPLACED

Below is a photograph of my school report cards from Year Three (1985).

I particularly like the bit that says “An interesting sense of humour“. In other words: MWAhahahahahaha!!!

Other stories might also help to illustrate the sort of student I was back then. The following comes from my Year Four teacher, who submitted this anecdote in writing for my 21st birthday in 1998.

It was end of year exam time. Everyone, including Adrian, was furiously putting their ideas on paper. Imagine my surprise at the end of the lesson when Adrian handed up a blank sheet of paper. When questioned about the lack of writing I was told it was written in invisible ink and if I held it up at the window I would be able to read it. This was perfectly true. Apparently Adrian’s pen had run out of ink the lesson prior to his exam but he had relentlessly carried on. Needless to say he re-did his story using a new pen. Some teachers just don’t seem to have a sense of adventure!

The thousand pictures of Pam Marlow

The Marlow family are very close friends of ours. Pam and Phil are the same age as my parents, and they all knew each other before I was born. Their children are a little younger than my sister and me, and our families used to camp in the sandhills together every Easter when I was young. These days, Pam helps me with my fortnightly shopping.

Pam has several creative pursuits, for example she writes haiku and couples it with photographs. She is hopeful of publication, and I hope to have more to say about her haiku in the future.

She has also occasionally built models, particularly of old buildings and towns. In the year 2000, for a university topic then called Advanced Professional English and later re-named Creative Non-Fiction, I interviewed Pam and wrote an article about her model-making adventures.

The article I wrote is reproduced below for your pleasure.

The Thousand Pictures of Pam Marlow

If an old building has gone forever, explains Pam Marlow, then whether it’s represented in words, paper, or even with a photograph, none of these media can truly capture the reality that was. “The best way to represent the busyness, the activity, the processes that were going on,” says Pam, “is to build a model.” When she talks about her craft, it’s clear that her enthusiasm goes far beyond the raw creative process – a recurring theme is her passion for accuracy. “Nothing’s worse than a model that kinda looks okay on the outside,” she says, “but when you look into it you see that it’s just a facade.” The walls of a stone building must be precisely the right thickness “otherwise the building doesn’t look like a building; it doesn’t look as though it should stand up.” To get the colour right, Pam likes to make her own paints by grinding local rocks into a powder. “I really enjoy when people look at my models and almost get a thrill of recognition that this looks real but tiny. They sometimes express the feeling that they could just imagine walking into the building if they were small enough, and that gives me enormous satisfaction.”

END_OF_DOCUMENT_TOKEN_TO_BE_REPLACED

When I was still in Junior Primary, a new handwriting standard was introduced into schools by the state government educational department. Students in my year level were the first to be taught the then-new standard, South Australian Modern Cursive, and the first to not be taught old-fashioned loopy cursive.

Being educated right at the point of change, I developed an interest in the idea of a personal standard handwriting. Take your handwriting, and abstract away from it things like wobbliness, slantiness, the precise proportions, and other aspects that aren’t under your conscious control. What you’ll have left is the essence of your handwriting, something that could hypothetically be taught to students if you became Emperor. It can be interesting to compare people’s handwriting at this abstract level.

END_OF_DOCUMENT_TOKEN_TO_BE_REPLACED

Posted in Education, Language, Self. 5 Comments »

My exercise book for the second half of Year Four (written when I was nine) contained a glossary. Being unfamiliar with the word “glossary”, I called it “The Helper of understanding the story’s in this book Dictionary“.

Most of the entries were diseases. Fictional diseases, that I’d made up. This would have been around the same age that I asked my uncle (a doctor) to identify the worst disease he’d ever heard of (he nominated several, but I don’t recall which).

Here are some examples:

I still have a couple of my school exercise books from when I was around 9 years old, as well as some other writings from the same timeframe. For example, as I said earlier, the adventures of Antherus were an obsession for many years.

Antherus himself was drawn as a hovering upside-down tear-shaped figure with three bands of colour, and could, among other things, become more and less solid at will, easily slipping like a ghost through solid objects if he chose. I had no idea at the time that “Antherus” was also one spelling for the name of the nineteenth Pope. This is perfectly fair: the Pope has no idea that I wrote fiction, or indeed, that I exist.

END_OF_DOCUMENT_TOKEN_TO_BE_REPLACED 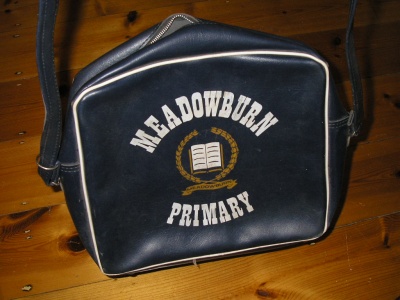 I have some memories of it, but they’re fragmentary, like trying to remember a dream. This post was originally going to have a wider scope – a few words about all the educational establishments I’ve attended – but as I sat and thought about it, various bits of memory about school in Scotland came back to me and so I’ve decided to list them. This isn’t really about education; it’s more about memory, and how odd it is that we remember certain things and not others. END_OF_DOCUMENT_TOKEN_TO_BE_REPLACED