Mum and I recently spent a few days in Australia’s capital city. Here is an illustrated overview of what we did.

We left for the airport soon after I got home from work on Wedneday 22 February and got to Canberra late at night after an uneventful flight (unless watching Mythbusters on inflight counts as an event). Events started soon afterward, though.

We’d booked to stay at the Canberra Motor Village, but there was no-one at reception when we got there, and no-one answering the phone number we had (later we learned there was a separate late-night contact number.) So just for that first night, we had to look for alternative accommodation. Problem was, all of the motels and hotels in Canberra were full. After driving past endless “No Vacancies” signs, we ended up sharing a meagre room in the expensive Canberra Rex Hotel.

After breakfast at the Rex (a fortuitous outcome of our accommodation drama, as I’d forgotten to pack the breakfast of caramel cashew nut bars and pineapple orange fruit drink I’d set aside for that morning) we went and booked in at the Motor Village. Then we set out as tourists to check off the first item from our visiting list, the National Bonsai and Penying Collection in Commonwealth Park. Here are some photos of the collection. 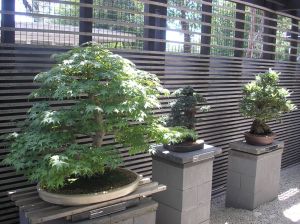 Next, here are some photographs from a walk around Commonwealth Park and the edge of Lake Burley-Griffin. The first shows Mount Ainslie in the background. The fourth was taken from the other side of the lake, and later in the day (before we went to the National Library). 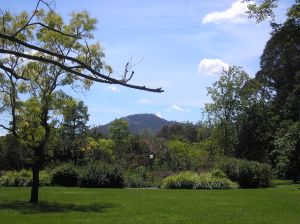 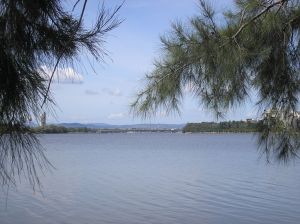 Moving on from Commonwealth Park, our next destination was the Museum of Australian Democracy at Old Parliament House, which contains a variety of exhibits on political themes. The photographs below show a model of the building and grounds, a chronological display of Australia’s Prime Ministers, a three-dimensional artwork known as the Greek Mother (caption here), and the view from the Old Parliament House Gardens (which are nothing special, mostly just roses.) 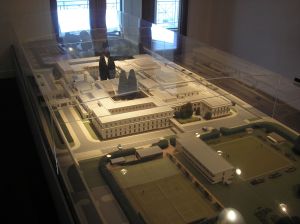 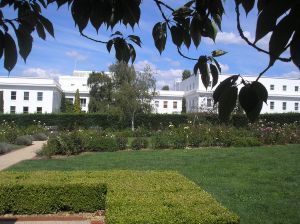 Australia’s home of government since the 1980s has been New Parliament House, which we visited next. In theory, the architecture of Parliament House, with grassy slopes on its roof that the public can walk on, symbolises that the politicians are under the people. In practise, it might as well symbolise that politicians behave in an underhand manner. (Also, you can’t actually walk up and over the roof. You can walk up the slopes as far as a guarded fence, but to get beyond that you have to go via the indoor route and its associated security checks. So much for symbols.)

Here are two photos, on showing the view of Canberra from above the entrance, and another showing the flagpole on the roof. A third photo, showing the grassy slopes, can be found here. (I didn’t take photographs from the inside — after all, we see the Houses of Parliament on the news all the time.) 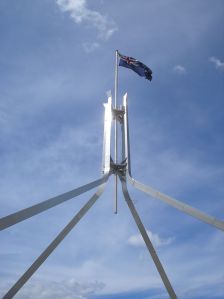 For the evening, I’d previously booked us tickets to see the “Handwritten” exhibition, on tour from Berlin, at the National Library (open until 9pm on Thursdays). The exhibition was in three parts, the largest of which featured handwritten letters etc by various people from history, mostly 18th Century. It was interesting, though in my opinion not quite as good as my memories of the Ritblat Gallery in the British Museum, London (which I naturally compared it to). For what it’s worth, James Watt might have had the neatest handwriting of the lot, but I won’t pretend to have been meticulous in reaching that judgement.

News was that the road to the National Botanic Gardens would be closed from Saturday, so we decided Friday was the day to go there. I always enjoy visiting botanic gardens, and the national ones were up to the usual standard. By far my best photograph was this one of Mum in the greenhouse. (Many of my other pictures were spoilt by image artifacts and I chose not to keep them.)

Next to the Botanic Gardens is the road up to the Black Mountain Tower, an ever-present beacon in Canberra. Here are a couple of pictures of the view. The photograph on the left looks toward Lake Burley-Griffin, and the one on the right looks further south (look for the white telescopes of Mount Stromlo on the right-hand edge). 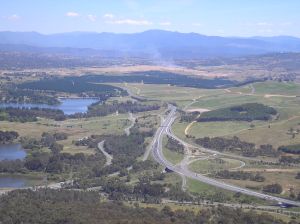 We visited Mount Stromlo next. A friend who’d gone without doing much research had warned us it was disappointing, but we both enjoyed it — in good weather it’s a great place to take photographs from. The first picture below shows the view back toward Black Mountain and its tower. The second shows the view from the cafe, with me holding a drink in my hand in the foreground (a very nice drink, incidentally). In the second row is a picture showing what remains of the 26-Inch Yale Columbia Refractor (caption here) and on the right, the view out the window. 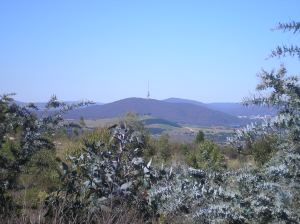 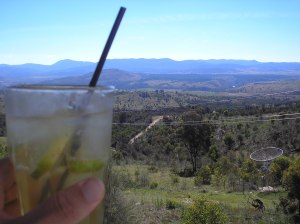 Gold Creek Village is a tourist hub in northern Canberra containing a variety of attractions. The entrance fees are often substantial, but at least the parking is free (in central Canberra it’s usually the other way around). We started our visit with Cockington Green Gardens, which in one section contains is a model of an English village and in another section contains miniature replicas of famous buildings from around the world. Both sections are beautiful. 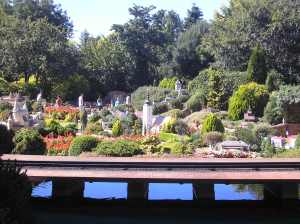 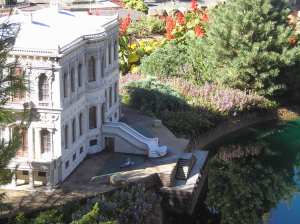 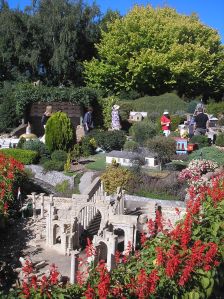 The village contains a number of gift shops, and I bought a couple of souvineers: a Green Man coffee mug, and a beautiful stained glass bird with real feathers. When I get around to it I’ll append photographs to this post, so watch this space. [Update: photos are below. The coffee mug is the Anne Stokes Oak King Mug available here.] 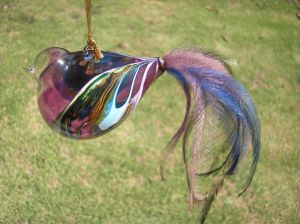 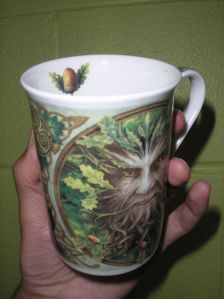 There are two art galleries in Gold Creek Village: the Aarwun Gallery of fine art on one side of the road, and the Aboriginal Dreamings Gallery on the other. They are both small, but I felt the visits were worth it.

Another attraction in Gold Creek Village is the National Dinosaur Museum. Here is a sampling of exhibits.

Finally we visited the walk-in avery, which is not something I’d do again, but I did get some good photographs of parrots. Here are two of my favourites. 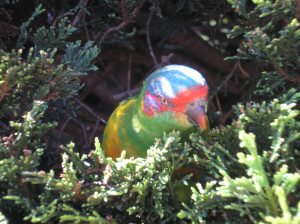 After returning from Gold Creek Village, we went for an evening walk by Lake Burley-Griffin and I took this photograph.

We’d had good weather on all the previous days, but on this day it was rainy and overcast (though still pleasantly warm). Our first destination was the Changi Chapel, originally built by prisoners of war in WWII and now on the grounds of the Royal Military College at Duntroon (caption here), and below on the left is a photograph Mum took of me standing by the chapel. Also on the Military College grounds is the Mount Pleasant Lookout, photographed on the right as well as the rain would permit. 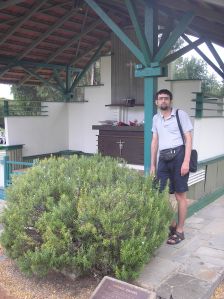 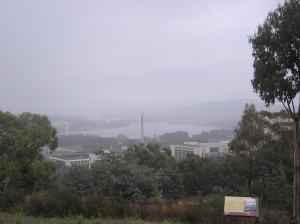 The Australian War Memorial was one attraction we visited more for Mum’s interest than for mine, because she’s old enough to remember relatives who fought in the wars. She pointed things out in the exhibits that were relevant to their stories, and together we found K G PEARCE on the memorial wall. On the left is a photograph looking out from the central part of the memorial (the names are recorded on the walls behind the arches). On the right is a close-up of one of the Changi quilts (caption here) because I like the dragon. It’s just one of many exhibits in the museum, but I have to say war doesn’t excite me very much as a topic.

We’d finished at the War Memorial by soon after midday, and went for a walk to hear music played on the National Carillon (returning to the memorial for coffee). This left much of the afternoon free in which to relax and prepare for the return to Adelaide the next morning.

The motor village was undergoing some upgrades while we were there, and the reception actually switched rooms. We wanted to borrow their facilities to confirm our bookings and print boarding passes for our return flights the next morning (we had our own laptops but not printers). But although the Motor Village staff were happy to help in theory, teething troubles with the new reception meant that such services were temporarily unavailable.

Our flight was due to depart at 6:05 am, so we’d set our alarms and got up at 4:30. Everything went pretty smoothly — it helped that on Sunday morning we’d had a practice drive to the airport.

Back in Adelaide I took a taxi home and got on with my day, catching up on sleep the following night.

One Response to “Canberra”