This is a blog post about the accessories and techniques I use for washing dishes.

It might not sound like a promising topic. But I find that interesting observations can be found in the most trivial of places, and that there’s much to be learned in comparing how different people go about ordinary tasks. So to start with, here’s a photograph of the various accessories I use for dish washing (some are posing for the photograph):

Behind these we have the plastic container that I keep by the sink to give the scouring pad, steel wool, toothbrush (middle left), and cloth (not shown) somewhere to belong. The toothbrush comes in handy to clean the few parts of the rotary cheesegrater that the regular dish brush can’t get to.

Speaking of the brush, that’s it on the back right, leaning against the big bottle of detergent. Notice that the model is one in which the bristles protrude beyond the end of the brush, not just sideways as they do on many other models. It puzzles me why anyone would use a brush with sideways-only bristles; it’s the ones at the end that get by far the most use.

On the other side of the detergent (I’m saving the detergent for later) is the dish mop. I was raised to wash dishes with a mop rather than a brush, but it’s the brushes that dominate the market these days and I’ve met people (including shop staff) who didn’t even know what a dish mop was! However, I’ve since discovered that a mop and a brush used alternately work more effectively than either alone — the brush tends to remove particles of food that the mop misses, and vice versa.

The brands of detergent in the bottles do not necessarily match the labels; they get refilled with whatever brand I last bought. The tall bottle in the back is the one I use when I’m washing a whole sinkful of dishes at once; more on that in a moment. The smaller bottle with the spraying mechanism (front left) is used individual utensils that I intend to use immediately. I’ve only ever seen such spray-on detergent in the shops once, but it’s a great idea and I’ve since refilled the bottle with a mixture of 50% detergent and 50% water.

I want to finish by showing how I add the detergent when washing a sinkful of dishes. I have a special technique that gets me the maximum amount of foam for the minimum amount of detergent. The secret is to wait until the turbulent running water no longer creates a circular film of high-velocity liquid at the bottom of the sink, and then to inject the detergent into the running water as shown in the picture below. Then just keep running the water. 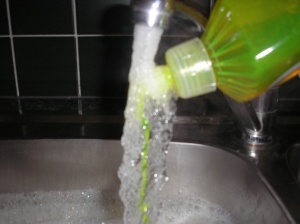 It only takes half a second of squeezing, but generates a lot of foam.