I’ve already shown you my bathroom. Now I would like to show you, up close, three ornaments that decorate it. One’s got a dragon on it, one’s a star, and the other’s a couple of fish. All of them are nice to look at.

Hanging from the ceiling above the washing machine is this glass-and-metal dragon ornament I bought at a craft fair once.

In front of the window is this star of beads and wire, which I bought one year at the Womadelaide festival.

Stuck to the front of the washing machine are a couple of Celtic fish, knotted together. These were given to me as a gift, and intended for being placed on a window. Putting them on the washing machine was my idea, and one that I consider very successful. (Flash not used for this photograph.) 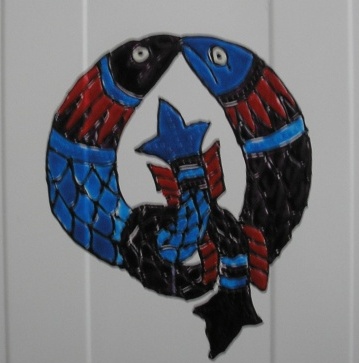