I’d made up my mind to do a science-related blog post, and the best topic that comes to mind is the big astronomy story from earlier in the year: the redefinition of the word “planet”.

And I’ll start with this cute little graph, which I’ll explain in a moment (you’ll need to click on the thumbnail to see the graph properly). 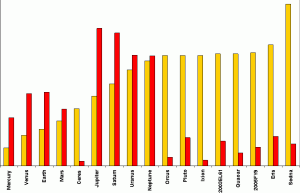 Now, I would have been content with the former status quo, which was to simply have no official definition of a planet at all. The way it used to be was that if you said that Pluto is a planet and I said that it isn’t, then we both would have been right, because there wasn’t any definition against which to check our claims. But if we have to have an official definition, then I believe the astronomical union eventually made the right choice. I would have regarded it as a tragedy if a definition been made official which included Pluto, so I’m happy that it’s been reclassified. (Not demoted, you understand. Reclassified. “Planet” is a description like “potato”, not a title like “princess”. Demotion is therefore a misnomer in this context.)

Mike Brown, who discovered Eris (the new kuiper belt object larger than Pluto which created the controversy), explains why a definition of “planet” that includes Eris and Pluto but not lots of smaller bodies as well makes no scientific sense. The fact is, if a complete knowledge of the solar system had been handed to us by celestial beings before we’d begun naming and classifying things, we would definitely not have put Pluto into a different category from the smaller kuiper belt objects. And now that we know more about the solar system, it is better to classify its contents based on hindsight rather than tradition (this is not very much to ask: after all, there’s only one object – Pluto – that requires reclassification).

Here is an analogy that I think explains the situation very nicely. If astronomical bodies were birds, then planets would be eagles (big and solitary) while asteroids and kuiper belt objects would be parrots (small and in flocks). Pluto is small for an eagle but big for a parrot, and at first we thought it was an eagle because it appeared to be solitary, but now we’ve discovered the rest of Pluto’s parrot-flock and are forced to conclude that Pluto is a parrot after all.

Take another look at that graph. Each of the seventeen largest sun-orbiting bodies in the solar system has two columns, an orange one and a red one. The orange column can be thought of as representing how far the object is from the sun (actually, if you subtract the height of the Earth’s column, then it’s a logarithmic scale of the square root of the orbital period, but the two are closely related by Kepler’s laws). The red column represents the object’s size (a logarithmic scale of the estimated diameter; although again, you have to subtract the height of the Earth’s column first).

You will notice that for the first few bodies, all the orange columns are at different heights, and then, towards the right hand end of the graph, there are a bunch of orange columns all at roughly the same height. Using the bird analogy, if many orange columns are at the same height, this indicates that the objects are part of the same flock, whereas if all the orange columns are at different heights, this indicates that they are solitary. (In one case, this indication is wrong: Ceres. It’s just that the rest of its flock, the asteroid belt, is just a little too small to be included on the graph. Also, the reason Sedna looks solitary is because objects that far out are hard to find.) You will also notice that the solitary objects have tall red columns (i.e. they’re big) whereas the object in flocks have short red columns (i.e. they’re small).

To put it in more physical and less metaphorical terms, the “big and solitary” bodies are the ones that dominate their region of space. A body is said to dominate its region of space if there’s nothing else anywhere near its orbit, other than its own satellites, that’s even remotely as big as that body. Physical processes have sharply divided all the objects that orbit the sun into those that dominate their regions and those that don’t.

It’s important to realise that this division is no accident. It’s not a coincidence that the big objects are the solitary ones: their solitariness is caused by their size. I’ve heard people argue vehemently that the new definition of “planet” ignores the possibility of a hypothetical solar system in which the big objects are all bunched up together and small ones are all spread out, but that’s as silly as proposing a benchtop on which the upside-down bottles are stable while the right-way-up ones are the ones that fall over. In the solar system, being big causes a body to be solitary, just as on the benchtop, being upside-down causes a bottle to be more likely to fall over. They are dependent variables, so a definition that assumes a correspondence is not presumptuous but realistic.

Also, there is no doubt that if future discoveries in astronomy challenge current definitions of astronomical objects, then the astronomers will revise the definitions again. That is because astronomers are scientists, not lawyers, and scientists care more about reality than about definitions.

[Update: I took part in a discussion in a comment thread here, in February 2009. A few points from that. Firstly, people who make a big deal out of badly-worded definitions are confusing scientists with lawyers. Secondly, one of the most common objections to the IAU definition is that objects should be classified by what they are, not where they are, but the fact is that to classify objects consistently by what they are would have been a more radical departure than the decision that was in fact made – the moon and spherical satellites of other planets would then have to be categorised as planets, though of course Phobos and Deimos would not. Thirdly, I don’t agree with all aspects of the IAU decision. I think the term “dwarf planet” is stupid, and I think the fact that the process was driven by the question of which committee gets to name stuff is fantastically stupid.]