I still have a couple of my school exercise books from when I was around 9 years old, as well as some other writings from the same timeframe. For example, as I said earlier, the adventures of Antherus were an obsession for many years.

Antherus himself was drawn as a hovering upside-down tear-shaped figure with three bands of colour, and could, among other things, become more and less solid at will, easily slipping like a ghost through solid objects if he chose. I had no idea at the time that “Antherus” was also one spelling for the name of the nineteenth Pope. This is perfectly fair: the Pope has no idea that I wrote fiction, or indeed, that I exist.

One isolated fragment of story, dating from 1987, reads as follows:

Many years ahead, there was a great power who built a city. One day the city blew up. The broken bits became the universes. Chrystals and mirrors were invented, and it was decided that each chrystal could open the mirrors to other universes. The universes were divided into groups, and one group was the Great Chain. The King of the Great Chain was the Robotroid. There were even smaller groups in the Great Chain and one was Part 1. There a power in Part 1 that some of the gods create themselves out of. One of these gods was Antherus.

Comparing the version of the adventures of Antherus in my grade four book (dated 18 September 1986) with a later version (written no earlier than May 1987), it is clear that I recycled a lot of story elements: re-using my own old plot ideas while reconstructing the fundamental elements of the fiction. In the 1987 source, it is clearly stated that the main characters are gods, and that they travel not only to different planets but also to different universes, whereas the 1986 source describes the same characters as people, and only mentions one universe (that said, the 1986 source does refer to Antherus putting all the bodies of the universe back in their proper places and “spraying” improved lifeforms onto them, which sounds pretty godlike to me). The 1986 source is set in the past, whereas the 1987 source is set in the future.

Many Many years ago (25000000000135 I think) On planet meralina, there was a man called Antherus. But…. Far away on planet Evickale were 3 evil people could Zotar, Yolgta and Geno. One day Antherus went to planet Evickale and met Zotar yolgta and geno. He burned Zotar in a volcano but he just became more powerful. (in that part of the universe you get 3 lifes.) Zotar pushed Antherus over a cliff. But antherus simply flew. So Zotar said ok. If I kill you the Universe is mine Hahaha Ha haha Ha haha One year chance

Chapter one the mouth.

Many years ahead, evil Zotar, Yolgta and Geno decided to fight Antherus (from planet Meralina) on planet Evicale. As Antherus was a God they needed the power of their second lives. For that reason, they all slipped into a volcano and died. On their second life Zotar wanted to have shorter trips to fight Antherus so he built a mouth to capture Antherus and planet Meralina. Antherus slipped out easily, but not the planet. When the mouth was opened, Zotar saw that planet Meralina would burn in planet Evicales boiling seas. So Zotar said
“This plan is working better than I thought.”
However, Antherus arrived just in time to save planet Meralina and put it back in its normal position.
“Aha!” said Zotar. “what we need is improvements!” as he turned the mouth into something that could kidnap Antherus abilities. Zotar used it, but Antherus used his ability to get back ability. When the ability muncher came back Zotar said
“What can destroy you?”
The ability muncher said
“You King Zotar.”
So Zotar fought Antherus with his own rays, but of course he failed.

The following photograph is of a doodle found with the 1987 source. I have no idea what most of the objects are supposed to be, and they don’t relate in any systematic way to the story, but I believe they are supposed to be represent various things that Antherus encountered in the multiverse. (The thing next to the moon-shaped object, for example, is probably the aforementioned Great Chain of Universes.) 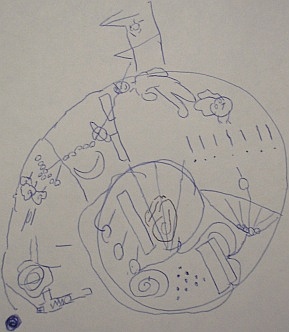 One Response to “Schoolbook archaeology: Antherus”